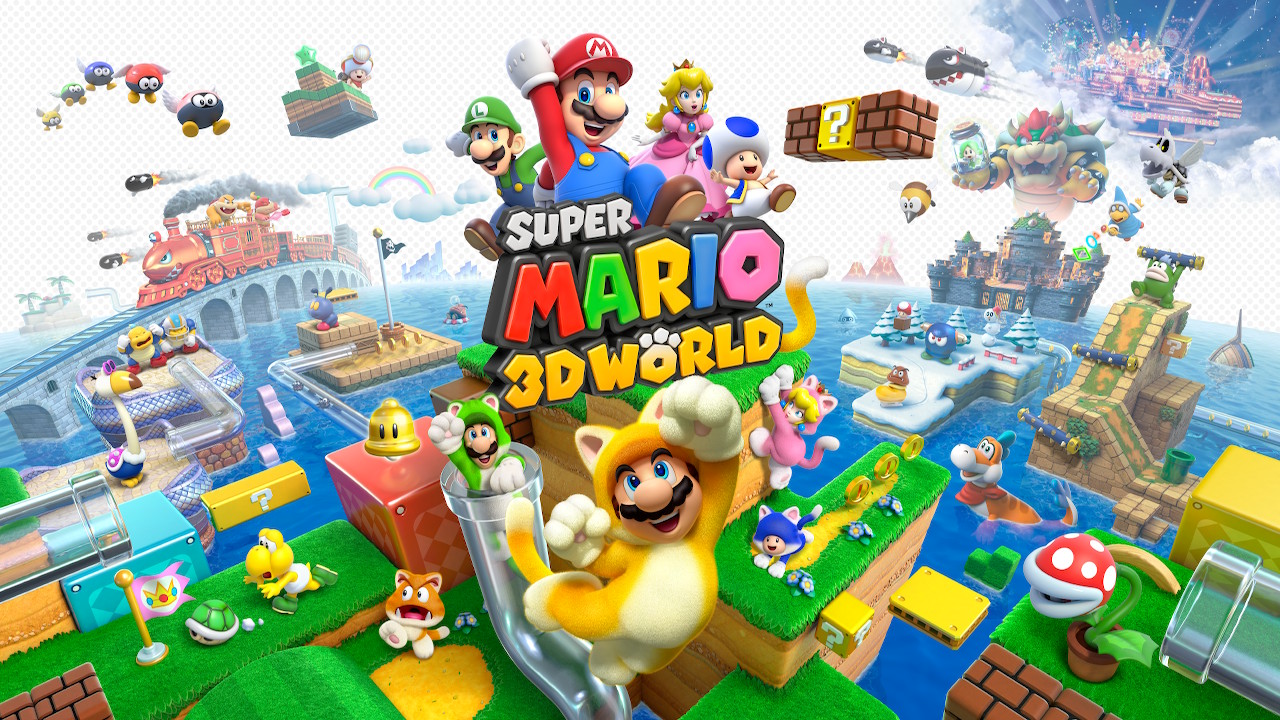 Super Mario 3D World is just like 3D World a hybrid of elements known from previous 2D games and 3D games. The method to complete a stage is to hit a flagpole and the move set is more the one from 3D games with dives and long jumps. That also means, that 3D world is neither a sandbox mario nor one of the New Super Mario games. And while I still think it misses some of the grandeur of the previous and following 3D games, that is not it’s downfall.

A princess in every castle

Right in the beginning Mario and Luigi do a plumbing. I was as shocked as everyone else. Good to see that they still know how, or even do. One of their last instances was probably inside Bowser himself (in Bowser’s Inside Story). When the clear pipe is fixed a Sprixie Princess appears and tells the brothers, Peach and random blue Toad that her sisters were kidnapped by Bowser. And it obviously is that moment that Bowser himself appears to make good on his goal to snap the last one of the Sprixies. Wait? Bowser doesn’t not kidnap Peach? Just weird. It is then the Players job to go and rescue them. In the same way as in strictly 2d games there are worlds consisting of different levels. Every world then ends with a boss fight against Pom Pom, Boom Boom or Bowser himself. Every freed princess then builds a clear pipe to another world. Next to the typical levels there are also enemy gauntlets that need to be cleared in short times and Captain Toad levels. These are modeled after Hakoniwa japanese miniature gardens. This mode later was translated into the great game Captain Toad Treasure Tracker which was on every new Nintendo platform from Wii U to 3DS to Switch. But let’s get back to 3D World. After you played through the main story with either Mario, Luigi, Peach or Toad you unlock four more special worlds if you can find all the collectables and touch the top of the flagpole in every level. The levels are focused on a specific platforming element and while some have the same theme they all feel nicely unique. They are also shorter the langes more on the side of 2D Mario games or Mario 3D Land. And while I don’t think that this is really a bad thing, overall the level design is less memorable than in any other Mario game. It sometimes just feels like a bland Mario platformer.

A game of two halves

I have to say, while the 3D sometimes feels like it makes the platforming less precise movement in 3D World is just great. Especially with the added speed of the switch re-release the levels feel quick and snappy. Just some bit sized fun to power through. It is a blusted to get to the end of the main game and not really hard. 3D World is one of the most fun “2D” platformers I played (it is mostly just like a 2D Mario). It manages to stand out of all the latest real Mario 2D platformers of the New Super series. I really think that this could be a path for Nintendo to innovate the general 2D formula. The Power-ups in 3D World are a bit of a mixed bag. There are the series staples - the Mushroom, Fire Flower, Super Star. They are fine, just like they always have been. Then there is the Mega Mushrooms which does not come into play often and is just as underused as always. The Boomerang Flower which is just fine. The new Double Cherry which is mostly used as another hit and to solve puzzles for collectables. The better use of this however was clearly in Captain Toads Treasure Tracker. There is the Super Leaf which lets Mario become Tanoki Mario. But just like in 3D Land it is not that cool. Yes, sometimes it really helps to float. But it is really out-shined by the Cat Suit. It is not for no reason being front and center of Nintendo's marketing. It is the main power-up of the game. Allowing to climb surfaces and overall even to just avoid large parts of some levels. There are some other items that come into play in some very specific instances - mostly to get collectibles but they are not really that important.

The main part of 3D World is really not hard. I lost more lives because I jumped after collectibles - because as long as you don’t quit out of a level or lose all lives you carry them on after death. Some of the Bowser boss fights then are really boring. While he tries to fling fireballs at you, they don’t need to be dodged. Just stand not directly behind him. I actually lost to one of these, because the time ran out playing it a bit to save as Mini Mario. The difficulty spikes dramatically then when you access the bonus levels, only to fall down right after the first two of these levels. But after the Star World the next two are remixes of levels of previous worlds.

The multiplayer part plays clearly better than in previous strictly 2D games. That is mostly because there is just more space. But 3D World lacks minigames and side activities. In modes that are more catered to multiplayer instead of just playing previous levels or start a new safe. And while I could not test the new online multiplayer it seems that you really need a good internet connection which is sadly a thing for most nintendo games.

Overall Super Mario 3D World is a great game for completionists as well as more casual players. For the later especially if you just stick to the main story. It has its perks in movement and overall fun level design. 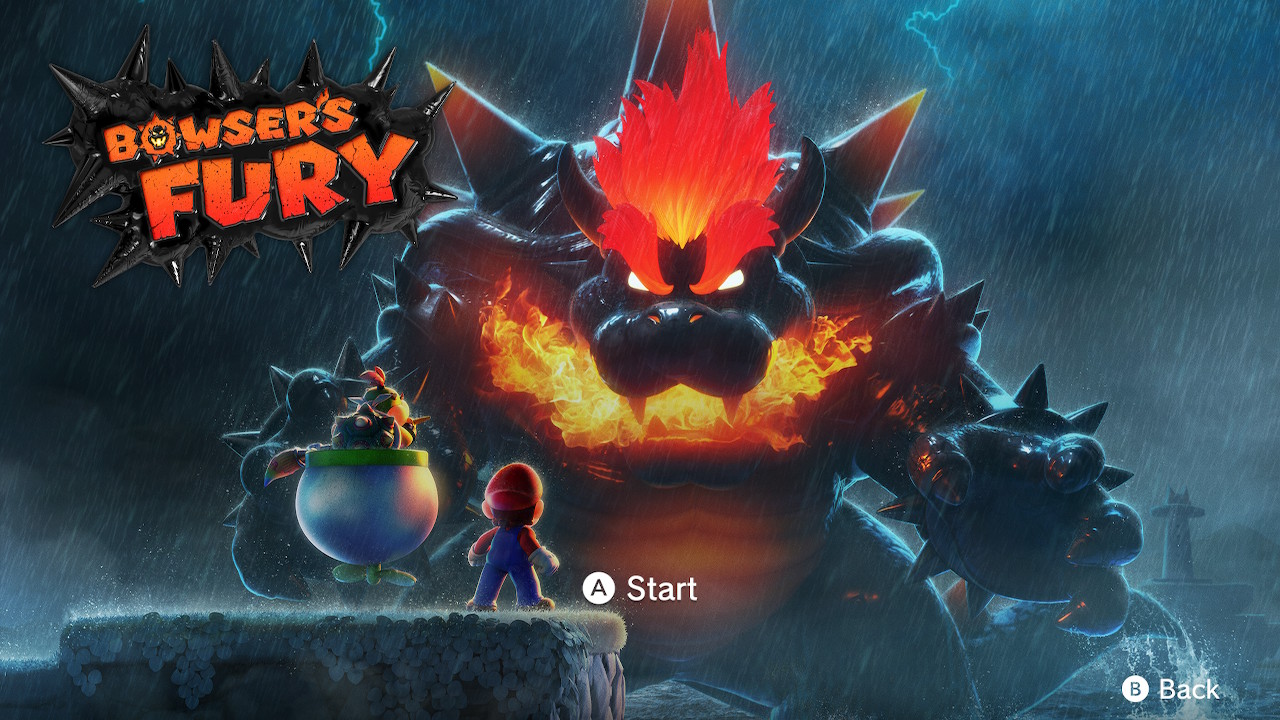 Bowser's Fury - The Future of Mario?

Bowser’s Fury is the really new part of 3D World. Mario is asked by Bowser Jr. to help him defeat the Fury Bowser and get the regularly evil Bowser back. The entire mode plays on an archipelago with different islands unlocking over time. Essentially Mario needs to collect cat shines to then activate a giant bell and fight Fury Bowser with a giant “super saiyan Mario”. The cat shines, all just repeat. For every island and every lighthouse there are some that are the same. For example a shine behind “fury blocks” that can only be destroyed by Fury Bowser himself. Periodically - with a bit of rain and then a storm - Bowser gets awakened out of his dormant state to attack Mario. But I mostly found myself waiting until he did just standing next to the blocks I wanted destroyed. Bowser calms down after you fight him or after you collect another Cat shine. The whole mode the player is accompanied by Bowser Jr. with him lending a hand. His AI is programmed to do as much or as little as the Player wants. He can just be there and throw you stored Power-Ups or he can be a real help. He even can be controlled by another player.

The most interesting thing about this mode however is the way the islands change over time. After you collected some shine and leave they seamlessly change without the player noticing the loading time. It is quite impressive because the performance suffers not that much. That is also the reason why this is taunted as the future of 3D Mario overall and some people believe it to be a big scale tech demo. We will see what comes of it.

Super Mario 3D World + Bowser’s Fury is a fun and welcome port of a really good game. It brings in enough new that it can appeal to even those that played it before. And while Bowser’s Fury is not the craziest mode it is fun and entertaining. Together with the replayability of the main game this package is well worth its price. And even so Mario 3D World is not the big 3D Mario and clearly stands behind for example Odyssey, I can see myself going back to it again and play through it again.