While normal mainline Pokémon games come almost yearly there hasn't been a Pokémon snap game since the first one. It has been 21 to 22 years since the original game was released in 1999 or 2000 for the N64 - as always depending on the region you look at. Pokémon Snap was at that point the first Pokémon game that featured 3d models of the little monsters. Overall this original game was a success and fans of it were really happy to hear about a new one. I haven’t played the original game so what is it all about? And is it too much of a Pokémon game? Was the wait worth it?

What is the game about?

New Pokémon Snap begins just like most games of the Franchise. You choose out of a limited pre-set of characters before you meet this game's professor - he is called Mirror in this case. You are a young Pokémon photographer to help the Professor with his research survey.. He tries to find out more about the Illumina venomenon and the history of the Lantal region. So it is on the player to hop into the hovercraft and take pictures of Pokémon on the different courses. After you run a course you decide which photos you will show the professor for him to rate. But unlike in the previous game the scope of these courses is much bigger. But we are not only talking about the length. Every Pokémon can be seen in four different states which are differentiated with one to four stars. One star will be awarded mostly when photographing the Pokémon just roaming around. The higher star ratings then are for the more spectacular stuff. How to get the different Pokémon to do these things varies a lot. Sometimes you just need to throw a Illumina orb at them or more progress in the course is needed. For all these states a picture of every Pokémon can be collected into the Photo Dex. A tool in your research and obviously this games PokéDex. Sometimes it felt a bit abnouxis what to do to get a specific outcome. Experimentation and rerunning courses is key.

But rerunning does not mean just seeing the same course over and over. Everyone of them has a separate research level that can be leveled. With every new level the course changes: Pokémon will be at other places or you can observe different behaviours. The score of the pictures shown to the professor are used as experience points. The better the photos the more exp. The star rating however is not correlated to the score for the picture, but will bring more experience if it is new.

Mostly the score is composed more of the picture composition, the distance to the Pokémon and if the front of the Pokémon is seen. The photo then gets a bronze, gold or diamond star. I think this is in some ways limiting. It may not be a good photo - as subjective as that is. The player may get a good score just for a Pokémon being big in the photo. But this is a game where you take photos of Pokémon. They are the main focus. Also it would be pretty hard to program a good enough AI to score pictures. The metric may be one maybe limited but also fitting the game itself.

New Pokémon Snap is a celebration of Pokémon. It is not about leveling the little Pocket Monsters and battling other people with them. It presents them in their purest form. And what a presentation that is. The environments are lovingly animated with a lot of details. Grass and leaves look nice but even more so the water. You can see through it and make out a lot of little things under the surface. And even if you just come to have a look at Lapras fins you can do that now. Especially in the underwater levels the lighting is something to behold. When taken into consideration how different the courses are New Pokémon Snap is something to behold. Especially when taking the varying weather and day and night versions of the stages in account. Shure with the underpowered Switch there is always something more that would be possible on other platforms but New Pokémon Snap is the most beautiful Pokémon game to this date. That is also because of the Pokémon themself. Never were they seen in such detail and moving around in a three dimensional space. Yes, there was Pokémon Tekken, but that is not really a fair comparison. In New Pokémon Snap it is all so much more alive. You can see all these behaviours that at most were in the Anime and maybe to some extent in the PokéDex entries. But all this is much more alive in this game. And with the player being more a observer - when not tossing a high number of fruits without hitting anything - it can just be about these little quirky and sometimes just magical happenings. When you make some Pokémon do this special thing or interact with another Pokémon that is maybe not even from the same species. I will not spoil these for you. 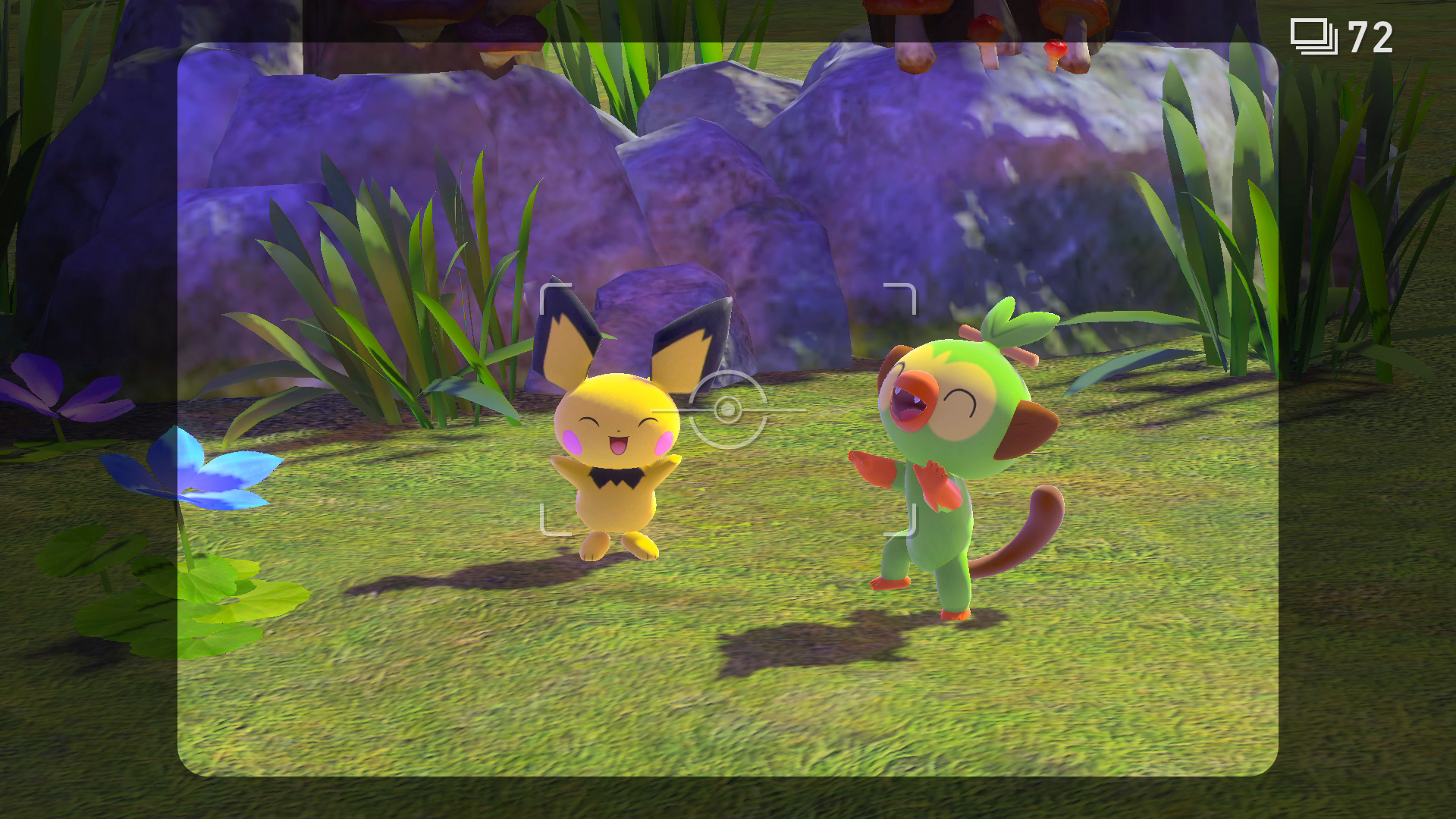 But Twitter and social media might. New Pokémon Snap comes in the perfect time. But even in game you can post your photos for others to see. There is even the possibility to resnap photos and apply filters and all that stuff to them. In game photos of courses you have not visited are marked with a spoiler warning, so you can rest at least there if that is something you are afraid of. 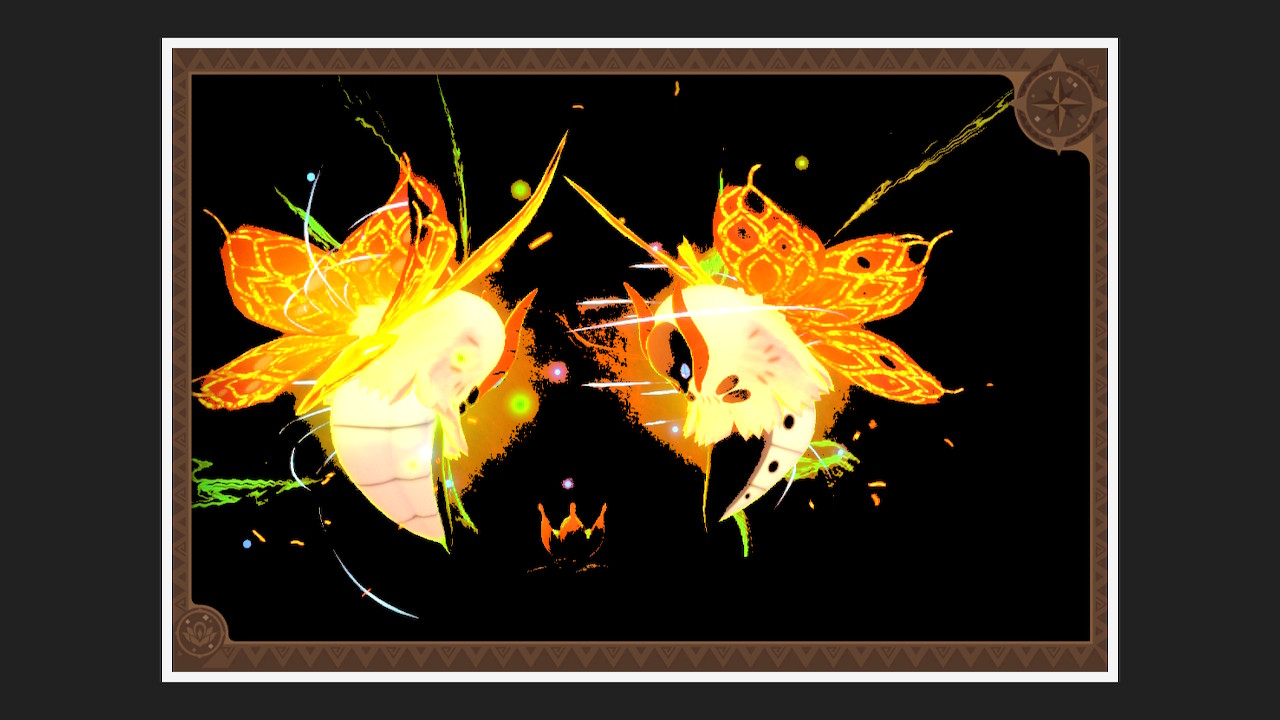 It is perhaps not surprising that a game about just taking photographs does not have the deepest story. It is a simple set up to get you behind the lens and start taking pictures. And it is a typical Pokémon story even more, as already said above. You have a spiky haired rival that wants to be better than you but in the end becomes more of a frenemy - did not think I would write that word today. And also the Illumina Pokémon surrounding lore is very much well trodden ground. But that is not why one should want to play this game anyways. It still is enough to ease players into it. And the fully voiced cutscenes are something new to the overall franchise and a welcome inclusion. But the progress in the story is one of the aspects that is not handled that well. At many points it was not clear what to do next. And the little text bubbles of some characters in the home menu were almost always not there when stuck. Which then resulted in just reruns of courses. At one point a course needed to be leveled up to the next level to encounter a special new Pokémon that would open a new way when the course was run another time. In other areas the progress is halted in the same way. Different Npcs give you requests for a special photo of a Pokémon. Sometimes these can be really helpful to get another star rating that the player has not yet taken a picture of. But the player is only permitted to ever get one picture evaluated per Pokémon. Which means if you took a picture fiting the request before getting it, you not only need to take it again, you can also not get a needed picture for the Photodex at the same time.

New Pokémon Snap doubles down on the concept of the original game but improves it in almost every way. There is no denying that it is at time of writing the best Pokémon spin off and more true to Pokémon themself than even the main games in some parts. It may not be something for people who are not into Pokémon at all, but if you have this interest then this is a game for you. It is at its best, when the player is left to freely explore all the different courses and observe Pokémon in their natural habitat. Also I found it a nice break of pace with its slower almost meditiv gameplay.