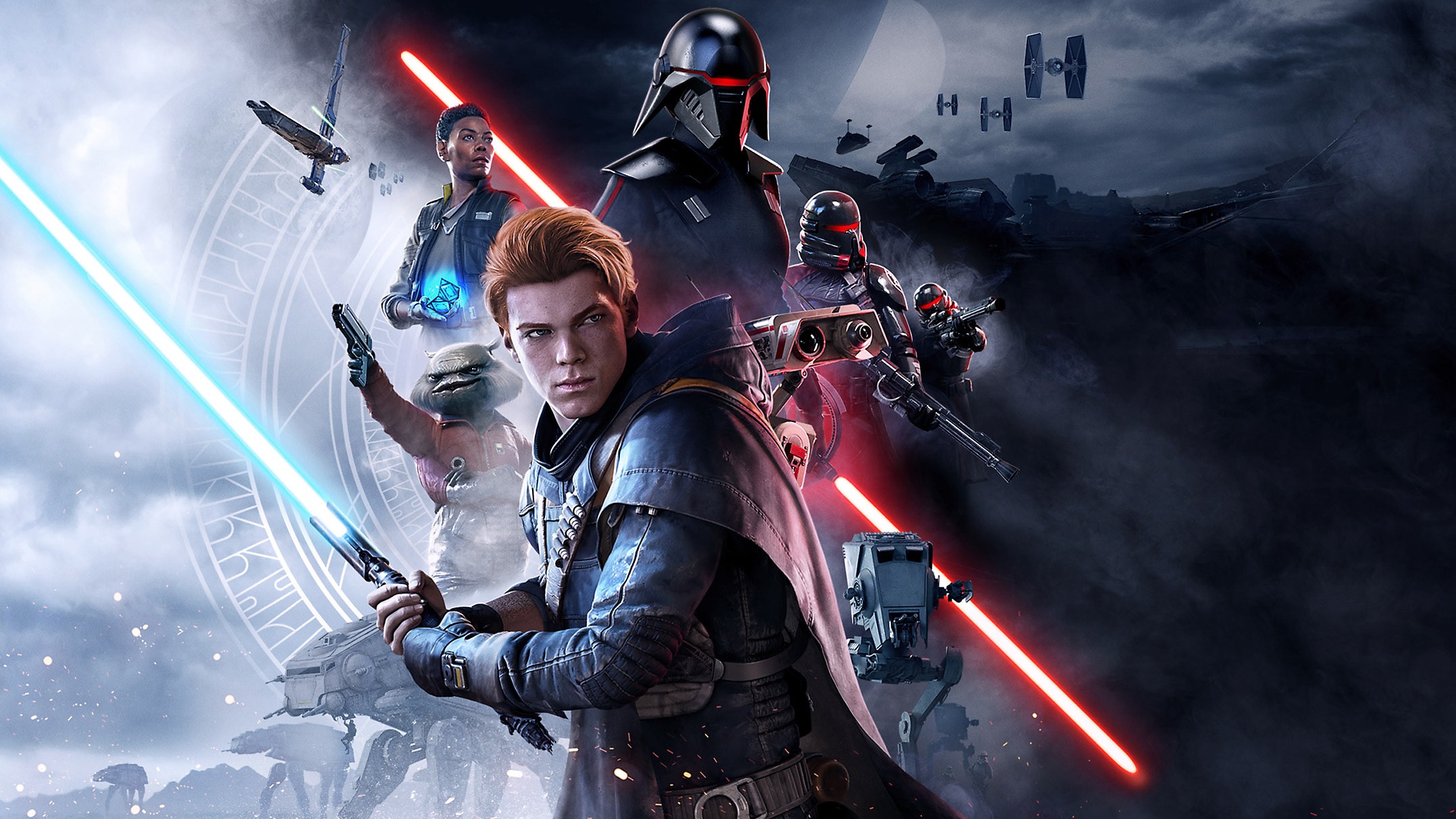 Jedi: Fallen Order features a lot more sliding down a slope of wet mud than you would think. It is quite a choice I assure you. It must be a really special Jedi power to find these slopes on all the different planets that Cal Kestis - the protagonist of Fallen Order - visits. Every one of these planets is its one separate map to explore with various sizes and biomes. Combat as well as level design took some inspiration from From Softwares Dark Souls-series and similar games.

But first since it is a EA published game and a Star Wars game Essaytopia gladly presents this disclaimer: Disclaimer: The Game doesn’t include microtransactions and that fact is stated more than one year after release so they are not coming down the line. (Probably have to do one for every single player game from Activision Blizzard, EA or Ubisoft etc.)

Starting the player off on the junk planet Bracca, Cal Kestis, a former padawan, needs to escape the Empire. On his way to find a hidden Jedi artefact and reconnect with the force and cope with his past. Set shortly after the Great Jedi Purge Inquisitors are after Cal. But luckily former Jedi Cere Junda is there to safe the day as a deus ex machina. Therefore the player and Cal can leave Bracca after a short tutorial that teaches the basics of traversal and combat.

At that point the hopping from planet to planet starts. You will come across some old known faces of the series but most of the characters in Fallen Order are newly designed. I found the story engaging enough. There are some interesting story beats that tie directly into the fallout of Order 66 as well as some things lore about the force itself. Most Star Wars fans will become a kick out of these. The main characters are a bit of a mixed bag. While I liked Ceres backstory and somewhat enjoyed the bickering pilot Greez, Cal Kestis is a bit colourless. He has somewhat of an ark and grows in the course of the story. But he could be more developed. In true Star Wars fashion there also is a new cute robot companion, BD-1. And he is quite useful. While I am not thinking that highly about creating something like a droid in a Star Wars property just for commercial reasons or because the stories of the presents or just a repeat of what worked in the past, BD-1 feels a lot more necessary. He is not only helpful but also important for and a part of the story. The story overall is interesting enough and engaging, although many of its elements felt predictable and well known. Many of the emotional beats did land quite well so.

Traversal beyond a slope

Jedi: Fallen Orders story plays out over many different planets that will be visited multiple times. The levels on these planets are designed as interconnected platforming sections which need to be traversed with a combination of Jedi powers. There are unlockable shortcuts and at the beginning many areas are cut off because Cal has not jet access to all of his powers. While on the path of the main story many of these levels feel good and fun to explore, coming back to find collectibles does not. In the story Jedi: Fallen Order has a way to guide you with falling platforms, enemies and other clues. Coming back later these are all gone and therefore it can be hard to find your way through the mazes only with the sometimes hard to read three dimensional map. Slopes are really common in a galaxy far away. They are part of some set pieces. When Cal needs to flee from some bigger enemy, there is under garantie a slope to glide down. These do not only give a great sense of movement but also cut you off from the way back. Which can further heighten the inaccessibility of the levels. The planets are different and feel quite unique with their own flora and fauna. Most of the puzzles in the old Jedi temples on all these different planets are largely the same. Gigantic balls need to be pulled or pushed, levers pulled and all that kind of stuff. And while I did get stuck one some of them, the puzzle solving was mostly okay. But also nothing truly special.

Progress of a Padawan

Still I really enjoyed the traversal and platforming a lot. There is an element of progression in the world with every new thing Cal learns. Double Jumps and Force pull open up new options and new places to go. It makes the game less linear and leans itself well for a story about a young Padawan. The Game is in that regard campariabel to a metroidvania. While the special Jedi powers are unlocked in the story as part of Cal reconnecting to the Force and remembering his training as a child, more combat focused abilities are unlocked through a skill tree and an experience system. There are a lot of options and I was glad to not be overwhelmed with too much stuff at the beginning. Especially since the combat didn’t click right away with me. Some of that is the game. Us the hitboxes can feel bad and enemies attacks are not always easily dodged. The last part comes down to there being more or less two ways to dodge an enemies attack: by jumping and rolling. And while you can roll away from most of the attacks I sometimes hit jump. But that only helps against some attacks. When Cal himself attacks many people have criticised that the attacks with a lightsaber are to tame for them in Jedi: Fallen Order. They wanted them to cut deeper into stormtroopers. Yes, that is mostly done because the game still wanted to retain a lower age rating. Still I feel it is nothing that takes much away from the game. The player can be a powerful force wielder that mows down stormtroopers regardless. Stormtroopers are mostly canon fodder in Fallen Order and only in large groups or the Purgetroopers can pose a challenge. But the player is never far away from the next meditation circle and therefore the next checkpoint. (This game's version of Dark Souls Bonfires. If you want to scream now, because I compared this game again to Dark Souls, then do so. Feeling better now?) But other the most souls-borns Fallen Order has separate checkpoints for most of the platforming parts. Falling down is a lot more forgiving that way. The bosses can be tricky but I didn’t take too long to bring them down. But they also don’t feel that refined. Some of them feel cheap and I felt robbed in two instances when they just got away. But Jedi:Fallen Order also has different difficulty modes. That makes it way more accessible than similar games. I actually lowered the difficulty at one point, before one of the boss fights.

Feeling a glitch in the Force

After more than a year Jedi: Fallen Order still sporns some graphical bugs. Sometimes I pushed an enemy just for him to be stuck in a wall. Other times Cal just fell just through some textures that didn’t probably load in. There were also some elevator rides that took a lot longer because some parts of the map had to load in. Most of that was one the biggest and also busiest map of the game. There are some new patches for the Next-gen consoles that seem to partly fix these problems but not completely. I could not check these yet.

Jedi: Fallen Order is a fun game that has its faults. The platforming and movement feel great though. They differ a lot from other Star Wars games of the past. The story may not have the most engaging protagonist but is still fun to experience. 8/10 Good