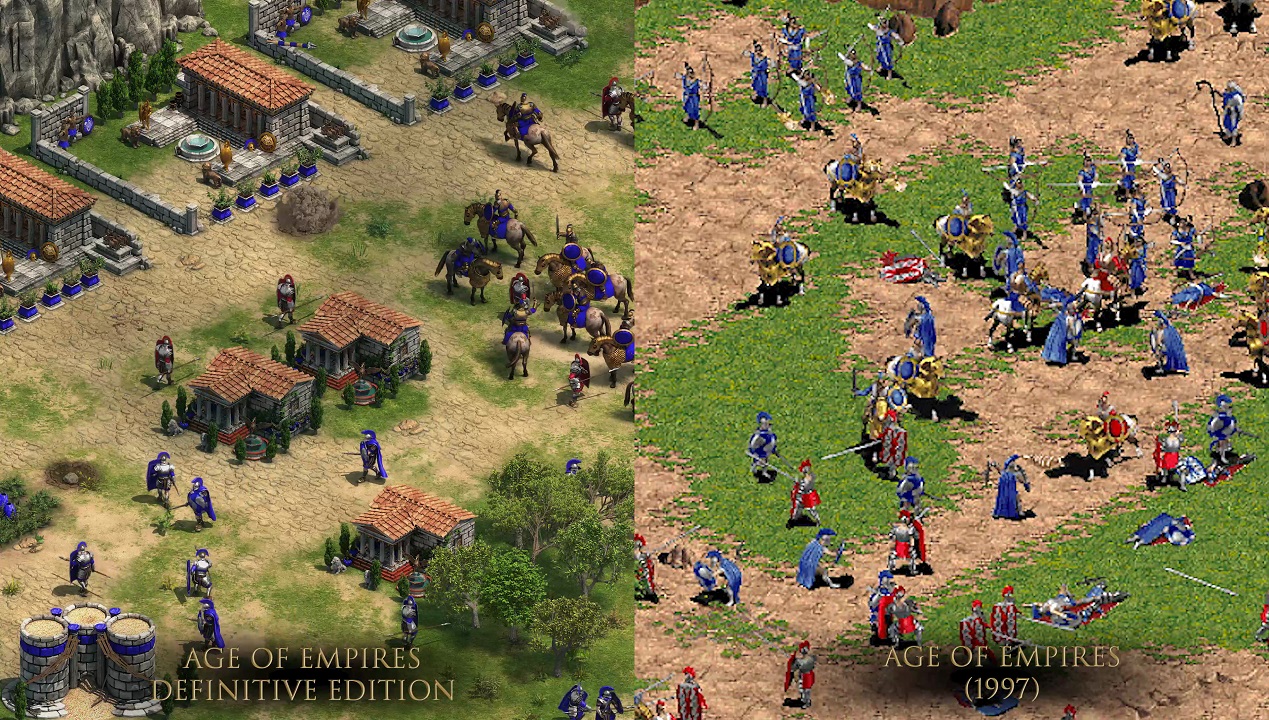 Graphics comparison of the different Age of Empires versions

Age of Empires Definitive Edition is a beautiful remaster of the first Age of Empires. There is no doubt about that. But it is also let down by the fact that it is a remaster. While there are some improvements, there are still too many bugs and problems. Bugs that were already in the original game and persist to be in this new and apparently “Definitive Edition”. Furthermore there are some archaic gameplay elements that should have outlived their existence.

Everything the original game had is here. All the civilisation and the campaigns of the original and The Rise of Rome are here. The core game is obviously the same. A RTS in which the Player must battle his enemies and advance through the different ages to unlock new technologie. But that is all well known and I will not focus that much on it. But before we start a little personal tale - just for fun.

To walk a thousand miles to the shelf

I walked the extra mile for this game in that I actually stood up and walked over to the self my old timey boxed PC games are standing on. After a quick search among them I had to backtrack to my desk and a different shelf where - upon my extensive collection of three music CDs - games on CD-ROM were shelved. No it did not take me long to find it there and it took not that much longer to actually install the game. One decision between 188 MB or 73 MB later it took only about 10 minutes to actually play the game. There were pixelated Logos and a cgi short film of a battle before - decided to go big with 188 MB.

I selected the smallest map, four players and the shortest time of 25 minutes. Also I decided to start in the last age and with a lot of resources. All of which meant the fight started as soon as the first barracks were built. I quickly disposed of almost all of the units of one of the AI to then start a battle with one of the other AIs and their catapultes. When the clock ran out I won. I cannot tell you why. One of the AIs had more points than me. But who is there to judge. Maybe the AoE's gods of the universe smiled at me that day.

The beauty of destruction

The game is really beautiful. The originals 2d sprites are fully updated with three dimensional models. So is the destruction of buildings. They now really crumble into debris when falling in on themselves. All of which is furthermore enhanced with 4k graphics.

But all that does not mean much when the gameplay improves so little. It is not that it is nothing, just not enough. Yes, farms can be renewed automatically. Yes, there are buttons for idle villagers. Buildings can no longer just produce one unit and instead stack up to 20. The improvements are all on that level. Little things. Quality of life.

But it doesn't help when there are still too many old bugs or problems. Units do not group together and therefore either need micromanagement or they will drip feed into the enemy's defences and die. They also still cramp together while attacking. Getting stuck on each other and building. Once I tried to attack a building next to two segments of wall, which meant that two soldiers stood in the opening and blocked off the rest. The same applies for villagers, then spot mining or whatever they should do.

The campaign has even more problems. There are bugs where you can't place buildings with no apparent reason. And while the limit of units can be set higher on normal singleplayer maps it obviously can't for the campaign. The player is stuck with a 50 max population which means it is just an outdated grind. Even more heightened with the scenario design. Sometimes the campaign sees you trying to get somewhere with just a few soldiers that will die when you just make one bad move. One mission wanted me to build two towers behind an enemy camp. While the position was marked with flags I had to take out the enemies before I could get villagers there. But it turned out to be for nothing. The towers did not bring me victory. Just when I killed all the other enemy the game triggered the victory conditions.

While the games updated graphics are polished too many problems with the gameplay make Age of Empires Definitiv Edition a subpar version. Bugs and a lack of polish are still persistent. With better graphics and a new remastered soundtrack not enough to counter outdated game design. If you are feeling nostalgic for the first game - an exceptional game for the time - play this version. It gets rid of some of the jank and updates the graphics. Plus giving you a way to play multiplayer. But ultimately it is a let down failing to achieve its true potential.