This was the beginning. In 1986, before I was even born, Nintendo released The Legend of Zelda for the Famicon Disc System, a floppy disc periveral for Nintendo's Family Computer in Japan. About one year later in August the game released in North America and in November finally in Europe. Where at last I played it 23 years later (and 24 years after the initial release) on my Nintendo Switch. The game saw massiv sales and was universally praised for its innovative gameplay and design. While it is not hard to find sales numbers with all the re-releases it is hard to get accurate once that include all the existing versions. The first Zelda game for that matter was released again on the Game Boy Advance, the Virtual Console of the Wii and Wii U. But that is just the ways you can buy the game. You can access the game also on the Nintendo Classic Mini or via the Nintendo Switch Online App. So ample ways to play the game. But what is the game really about? With the boring stuff out of the way let us dive into the history of the development and the design philosophy. Finally this article will be taking an expositional look at the influences this game had on the Zelda series but also the whole gaming landscape.

Development of a gaming franchise

When the development of The Legend of Zelda began in 1984, Nintendo’s other big defining franchise Mario in form of the first outing of Super Mario Bros was as undefined as Zelda itself. In 1984 the development of The Legend of Zelda began under Shigeru Miyamoto and Takashi Tezuka. At the same time the first Super Mario Bros was in development and the team worked on separating and defining these two franchises. While Mario was to be more linear, the Zelda-franchise was designed to be more open. The question of what the player needed to do to progress was at the forefront of the game and is still an element of Zelda today. Like in Super Mario Bros the goal for the Player was no longer a high score, but to finish the game. If you know anything about the gaming landscape in the 80s, the arcade was still alive and of some importance. Many games on the NES and other consoles were ports of arcade titles. Therefore the two titles were already quite different and probably shaped the future to come. Also a leap into the future was the chance to save your game on the cartridge (the floppy disc based japanese version worked a bit different). For the first time ever a battery powered RAM was used to save game data of the player on any cartridge based medium. This in turn allowed bigger games that didn't need to be accessed with a password.

But what was this bigger game about? The core concept of this Zelda game was exploration. Miyamoto later stated in an interview that he wanted the player to experience the wonder he felt while exploring the nature around his childhood home near Kyoto.

“When I was a child," he said, "I went hiking and found a lake. It was quite a surprise for me to stumble upon it. When I traveled around the country without a map, trying to find my way, stumbling on amazing things as I went, I realized how it felt to go on an adventure like this.” David Sheff “Game Over” The Players therefore set out as Link in a gameworld that is composed of screens, which represent a small part of the overworld. Without a sword the dark cavern at the top of the very first screen is the first place to go. Here you will get not only your first sword but also meet one of the Npcs of the game: the old man. 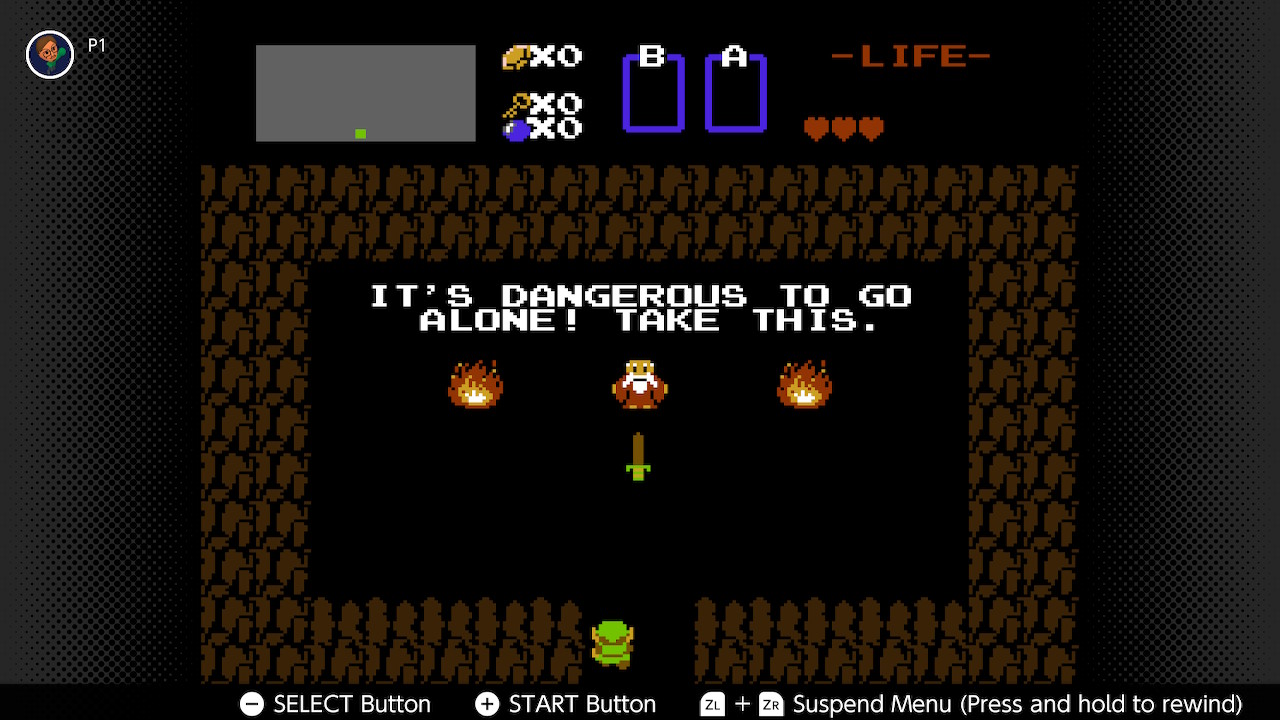 The accessibility of confusion

So you set out in that dangerous world. Moving from screen to screen the aim is to find the eight fragments of the Triforce to then beat Ganon and save princess Zelda. In a top down perspective you venture through Hyrule fighting monsters and completing dungeons. But first these dungeons need to be found. For the beginning of the game the manual will be a good source to find your way around. It doesn’t only feature a lot of information on enemies and items. No, there is a map of large parts of the overworld with marked locations for the dungeons 1 to 4 and maps for the first two. After that the clues are more limited. The Player could well stumble into the fourth or sixth dungeon right at the beginning of its journey. Other things are more obtuse to find. At some places in the overworld, there are boulders to move, trees to burn and bombs to place. Other than in later entries that have a variation of such secrets, you will not find them on the basis of visual clues. With the exceptions of some that are in a significant place, these boulders look just like any other object in the overworld. While you can just burn any tree you come across, the candle can only be used once on any screen. To do so you need to go back and forth between the screens or get a better candle. But bombs are the worst of the three. Not only do you use them up, there are also a lot of possible stone walls that could hide anything.

The dungeons are a lot simpler, but that makes them way more accessible today. The rules are also still the same as in later entries for the most part. Find the stone to push, kill all the enemies in a room, or obtain the key to open the door. Funnily enough the key is already there if an enemy carries it. It is just simply there with the player who can see best behind the Stalfos you can encounter even in the first dungeon. There are also walls to bomb that have the same problem as the once in the overworld.

Apparently Miyamoto himself thought people should come together and by talking about it solve some of the puzzles, find the secrets. It will be hard to do that now. But if you count a guide on the internet as a different person it is even easier. The secrets are mostly rupees for better items and sometimes a better item itself. Also of course heart containers. You don’t need most of them to complete the game.

Before I give my last thoughts about the accessibility of The Legend of Zelda let’s quickly take a look at the enemies. If you played any Zelda game, most of them are known to you. Some of them take some more hits - like Lynels - the bosses then are quite easily defeated. They will mostly just hit way harder. Even Ganon felt a bit undercooked and easy. But these bosses are mostly a puzzle in themself. Which part do you need to hit? Which item will work? And will you have still enough hearts from their hard hits?

My recommendation is to play the game with at least maps for overworld and dungeons. Even just to find secrets and the dungeons. You will know yourself if you would need more help and a whole guide. For me the dungeons are still perfectly possible to finish without much help at all. The last one is quite complex and there are distinct ways through it depending on a specific item in your possession. Playing it on Switch and the Nintendo Classic Mini it will allow for safe states, which help not only to get you through the game but mostly also safe time.

I really enjoyed playing The Legend of Zelda. Sure the age shows more in the graphics, and hitboxes. But by no means did the game age poorly. It is afterall still considered as one of the best games in history of video gaming, and definitely one of the most influential. As a fan of Zelda's puzzle gameplay and dungeons it was fun to see where it all started. To move from screen to screen not knowing what the next one holds.

From a historical point it is interesting to play a game that not only spawned a big gaming franchise but also had a big influence on the gaming industry itself. A game that also influenced the whole genre of adventure games. And while not considered a rpg itself, the first Legend of Zelda laid the groundwork for so many great things. The more open nature, the progression through an overworld led the gaming world forward. Also these become series staples as did unlockable weapons and puzzles.

Would I recommend people play this game, if they never have? Yes, I do. If you enjoy retro games, adventure games or are a Zelda fan, I think many aspects of the game still hold up well. It can be a fun time even with a bit outdated controls.

Part 1 of the Zelda Retrospective series